by Nancy Leson for Seattle Times.

If you’re one of those people who never understood the lure of Lunchbox Laboratory — the burger-joint some consider the best in town — you’re not alone. There are those who found the Ballard hole-in-the-wall too small, too spendy and way too funkadelic. Others were offended by gruff service and fear of cardiac failure. Even the Lab’s fervent fans were known to balk at its erratic hours. “When they sell out, they close — so call ahead” suggests the 2011 Seattle Zagat Survey, published last week touting the Lab’s “`amazing’, cooked-to-order creations `huge’ enough to `feed two adults.'” 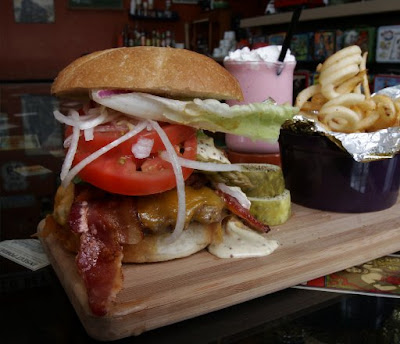 Bet you can eat just one. A bacon-burger deluxe with curly-fries and a handmade strawberry shake at Lunchbox Laboratory in Ballard. [Seattle Times/Greg Gilbert]
Of course, no one has complained as vociferously about Lunchbox Laboratory than the man whose love/hate relationship with food — and his restaurants — has been well documented. “I hate being owner of this place,” owner-chef Scott Simpson told me last week — days before shuttering his joint Sunday in preparation for its big move to South Lake Union. “I’m a terrible businessman. I’m awful at it!”

Simpson made his name as the original owner of the Blue Onion Bistro (since sold, later closed), followed by the short-lived fine-dining-place Fork. And everyone who follows such things knows he’s been looking for a way out of Ballard since he moved into the ramshackle shack at 7302-1/2 15th Avenue N.W. Well, he’s finally found an exit-strategy — thanks to a new business-partnership that has him jumping out of the managerial fire and back where he belongs: into the kitchen with his French cast-iron frying pans.

Providing the platform for his jump is John Schmidt, owner of Southlake Grill.

Schmidt’s South Lake Union grill has not been as popular — nor as profitable — as others in his cadre of Neighborhood Grills: among them the Green Lake Bar & Grill, Eastlake Bar & Grill, Lake Forest Bar & Grill and Crossroads Bar & Grill (another, in Bremerton, is slated to open this spring). In South Lake Union, Schmidt says, “You need more of a cutting edge, a hip, urban product.” He’s convinced he’s found one, thanks to Simpson. “We were trying to find a solution to South Lake Union and Scott was looking for a larger facility,” explains Schmidt. “It was a perfect marriage, a symbiotic combination of needs. He had the product, we had the space.” 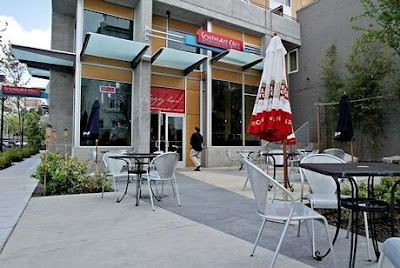 Southlake Grill at 1253 Thomas Street will soon close and re-open as the new Lunchbox Laboratory. [Seattle Times/Greg Gilbert].
Indeed he does: 5000-square feet of it, including two bars, seating upstairs and down, and a sidewalk patio. Southlake Grill is slated to close after service January 16 and reopen January 24 after a swift cosmetic-makeover as Lunchbox Laboratory: the 150-seat full service-restaurant version.

Simpson is jazzed. “I’ve been working with [restaurant developer and investor] Arnold [Shain] on this idea for two years,” says the 38-year-old chef, outlining his expanded menu, ideas for crazy cocktails and plans for a second-story banquet-room-cum-arcade housing video games like Pac-Man and Space Invaders.

“We’ll keep the burgers pretty much as wacky as they were,” he says, describing an expanded menu including the take on TV dinners he’d hoped to do at the original Lunchbox Laboratory. He’s also planning to serve Kobe-beef corndogs and souped-up sandwiches like an Elvis-inspired cross between a Fluffernutter and a Monte Cristo — made with peanut butter, bacon and bananas. And considering reincarnating specialties Dr. Scott’s Maple Duck — among the dishes that blew this critic away at the original Blue Onion Bistro.

Simpson will be bringing along a four-man kitchen crew and his female front-woman, Allegra Waggener — as well as their collection of pop-culture kitsch. But the key to the new restaurant’s success will lie firmly in the hands of Schmidt and company. 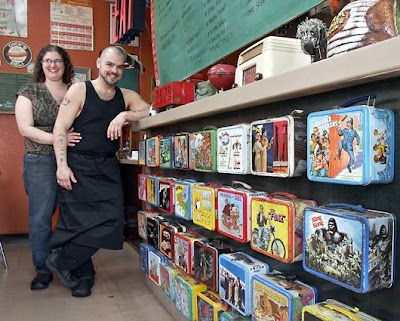 With help, Allegra Waggener and Scott Simpson hope to do it all over again, bigger — and better. [Seattle Times/Greg Gilbert].
“This is all about the Lunchbox Lab finding an opportunity to expand its menu and better accommodate its customers,” insists Schmidt, who’s weathered big-time expansion pains as co-founder of the Taco del Mar chain. Lunchbox Lab is not another Neighborhood Grill, says Schmidt: it’s an opportunity to put a savvier operations-team behind a brand that deserves a broader platform. “We don’t anticipate changing what we do, and Scott doesn’t anticipate changing what he does.”

That being said, “It’s going to be a very tightly run restaurant. Running out of the ground duck burgers by 2 p.m. isn’t really going to be an option anymore,” says Schmidt, who plans to keep the place open from 11 a.m. till 11 p.m. daily. “As a faithful customer, you should not notice any change in product coming out of the new kitchen.”

As for further expansion plans, Simpson insists they’re in the works. Schmidt’s take? “My brother [James] and I started Taco del Mar, then these neighborhood restaurants. Growth is what we’re about.” However, “Right now, protecting the integrity of Lunchbox Laboratory is our priority. Let’s move Scott in, give him a better environment to do his menu, make sure we get that correct — and then we’ll see what the future holds.”